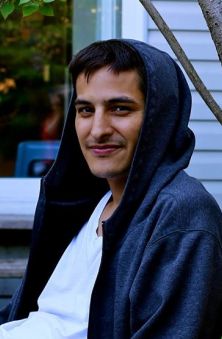 Cliff Cardinal’s play Stitch debuted at SummerWorks 2011, winning both the Spotlight Award for Performance, as well as Theatre Passe Muraille’s Emerging Artist Award for the script’s notable artistic impression. huff, about the lives of Wind and his brothers who are caught in a torrent of solvent abuse and struggling to cope with the death of their mother, won the Buddies in Bad Times Vanguard Award for Risk and Innovation at SummerWorks 2012. huff’s current national tour includes the PuSh International Performing Arts Festival, the Magnetic North Theatre Festival and the Pivot Theatre Festival in addition to this presentation at the NAC. Another play of Cliff’s, maria gets a new life..., debuted at SummerWorks 2013. “This captivating tale of an off-grid mother solidifies Cardinal as one of the most talented and intriguing writers in the country.” – NOW MAGAZINE. Cliff currently studies playwriting at the National Theatre School of Canada.

Playwright's Notes
huff began, like all my stories do, as a creative exploration of the pain of those living outside the mainstream: the weirdos, the addicts, and the romantics. To take the characters to their lowest, where they hurt the most, and to find them there with love. huff represents the people whom I believe are Canada’s most taboo subculture: First Nations youth abusing solvents, at high risk of suicide. The challenge of telling a story so bleak is to draw the audience in, not push them away; to inspire hope, not hopelessness; and especially to incite others to tell their own stories. It’s this last reason that inspires me to keep crawling into this mess of shame and redemption, to keep telling this story. The creative journey for me and my co-creators, Elizabeth Kantor and Karin Randoja, has been compelling and exciting from the very first breath. This was a very rewarding collaborative process and I am extremely grateful to Karin and Elizabeth for their fearless investigation of the subject matter and their dedication to hope and truth.
- Cliff Cardinal