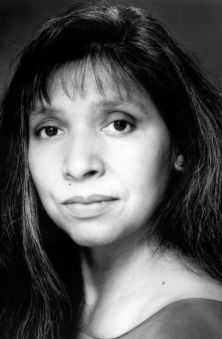 Raised in: New York, California, Ohio /Based in: Toronto, ON

Theatre: Monique is from the Guna and Rappahannock nations and adopted into the Cayuga bear clan. A Toronto-based actor/playwright and artist-scholar, she belongs to the second generation spun directly from the web of New York’s Spiderwoman Theater. Her play Princess Pocahontas and the Blue Spots was produced by Nightwood Theatre and Theatre Passe Muraille in 1990, on radio by CBC and published by Women’s Press in 1991. Credits include premieres of: The Rez Sisters (Native Earth Performing Arts); Red River (Crow’s Theatre production); The Adventures of a Black Girl in Search of God (Nightwood Theatre/Obsidian/ Mirvish Productions) and two seasons as Ariel in The Tempest (Skylight Theatre). Monique’s body of work in Indigenous performance theory, process and practice includes her collaborative, interdisciplinary play Chocolate Woman Dreams the Milky Way, which premiered at the Helen Gardiner Phelan Playhouse in 2011 in association with the University of Toronto Graduate Centre for the Study of Drama and UC Drama Program.

Other: Monique received a Best Supporting Actress nomination from the First Americans in the Arts for her role as Grandma Builds-the-Fire in Sherman Alexie’s film Smoke Signals. She was a co-founder of Turtle Gals Performance Ensemble with whom she co-created The Scrubbing Project, and the Dora Mavor Moore nominated The Triple Truth. She is currently the Artistic Director of Chocolate Woman Collective.  Monique is passionately dedicated to a theatrical practice as healing, as an act of reclaiming historical/cultural memory and as an act of resistance. She is the co-editor, with Ric Knowles, of Staging Coyote’s Dream:  An Anthology of First Nations Drama in English vols. I & II, published by Playwrights Canada Press.