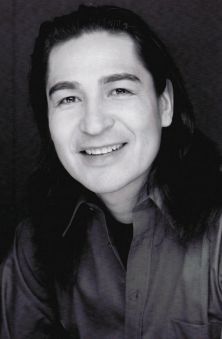 Raised in: Brochet, MN/Based in: Toronto, ON

For the NAC: Billy is happy to return for a fourth time to the NAC, previously appearing in Kevin Loring’s Where the Blood Mixes (Vancouver Playhouse/Belfry Theatre), Marie Clements' Copper Thunderbird (co-production with Urban Ink Productions); and Tomson Highway's Dry Lips Oughtta Move To Kapuskasing.

Theatre: An actor of Cree descent, his work in theatre, film and television for the last 28 years has taken him across Canada, from The Belfry Theatre in Victoria, B.C., right to The Sound Symposium in St. John's, Newfoundland.  Some of his other theatre credits include  The Bad Man (Steven Cole Hughes, for The Creede Repertory Theatre in Colorado);  Raindance (Landford Wilson, for The Purple Rose Theatre Co. in Chelsea, Michigan); Almighty Voice and His Wife (Great Canadian Stage); and The Indian Medicine Show, both of which were written by Daniel David Moses (Theatre Passe Muraille);  Tomson Highway’s The Rez Sisters (Factory Theatre), plus 12 plays for Native Earth Performing Arts Inc. in Toronto, one of which included his own play, Fireweed.

Other: He has also worked extensively in the U.S.A., and recently had the privilege of working on the Mediterranean island of Malta for the four hour television mini-series, Moby Dick (Starz Encore).  A few of his other film and television credits include the lead role in Elijah (The story of Elijah Harper for CTV); the lead role in Justice Denied - The Donald Marshall Story (CBC/NFB); We Shall Remain (PBS); TV series Libery St. (CBC); and the Robert Lepage film Le Confessionale, Atom Egoyan's Exotica, and Terrence Malick's The New World.